I met with Chef Martin Rios of Restaurant Martin last week to learn more about his career leading up to his latest venture, his favorite menu items, his philosophy, and what exciting things are happening at his restaurant. We sat in the bar area, taking in the afternoon sun coming through the southern facing windows. His warm, approachable demeanor that I recalled from the past lived up to my memory as did his affable smile and quiet, yet steady enthusiasm for his art.

While Chef Rios took care of some quick ordering business (speaking with a soft, yet authoritative river of Spanish to a clearly trusted kitchen employee), I perused the dinner menu hungrily; would I have the Butternut Squash Bisque for an appetizer, or the Carnaroll Risotto? Would I pass over the Classic Black Angus Beef Tenderloin in favor of the Heritage Duroc Pork Chop for the main course? Or would I enjoy the Yellow Fin Tuna with a Miso-Sudachi Glaze? Chef Rios pointed to the Maple Leaf Farm Duck Breast as one of his favorite menu staples before lighting up even further as he explained the Seafood Creation of the Evening; a daily inspiration based on the freshest seafood available that day.

Chef summed up his philosophy to his menu with exacting succinctness: “Anything we put on the plate, we want to mean something.” He elaborated a bit more, stating that his dishes are designed around the food’s natural flavors and less sauces. Well before “farm to table” was a buzz-word, he partnered with multiple local farms whenever possible; striving for the freshest and most flavorful ingredients from his garden grown herbs up to regionally raised livestock. He and his staff work diligently to accommodate all dietary restrictions, going to great lengths to re-work a popular menu item or to even create something unique that will meet the guest’s needs without compromising the quality of the meal.

Naturally, such great food beckons to a fine wine, yet Chef held no pretense about his simple wine tastes—Pinot Noir—before pointing out that he employs four Sommeliers, all of whom are at one and two levels. So if Pinot Noir doesn’t suit your fancy, they will gladly assist you in picking the perfect wine for your meal.

I distinctly recall moving here in 2002 and being told almost immediately that the “one” restaurant to try downtown was The Old House, then located in the Eldorado Hotel. As with many world-class Executive Chefs, Chef Rios began working in Santa Fe in 1988 as a dishwasher in the back kitchen at the Eldorado Hotel. After a few years earning his stripes in a variety of positions, he ventured to New York for a spell of direct, world-class restaurant experience and a six month period in France, each place broadening his quiver of culinary styles. In time, Santa Fe worked her magic and pulled him back to the Old House where Chef Rios established himself as one of Santa Fe’s most respected and palate-worthy Chefs. Other eventual opportunities arose—Chef took the helm at the esteemed Anasazi restaurant, then Geronimo on Canyon Road. As with many ambitious and talented Restaurateurs, the siren song of owning his own business beckoned him, and thus, Restaurant Martin opened its doors in September of 2009.

Taking pride in offering food both to Santa Fe’s well-heeled travelers and local friends and family, Chef and his wife Jennifer actively participate in the Santa Fe Community. Chef Rios works with Cooking with Kids, while Jennifer is president of The Horse Shelter. I often run into Chef at our children’s school events, admiring that he carves out time as one of Santa Fe’s revered celebrity chefs to celebrate his daughter’s academic and scholastic success.

We concluded our conversation with a tour of his new, enclosed patio space with roll up, garage doors facing his open patio seating. Designed to allow for year round patio feel, it seats up to 72, working perfectly for small weddings, receptions, and private functions of all kinds.

Until next time, Buen Provecho! SamG of IOG 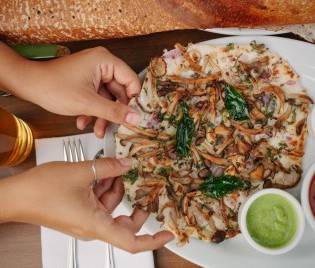